Spoiler Alert – #EDCMOOC people if you havent seen this weeks films you should probably not read this yet – go watch the films, they are fun, will take you 20 minutes, then come back here 🙂

The film Bendito Machine III has a strong sense of technological determinism about it, the technology is clearly seen as the dominant or defining force in the lives of the characters.  It takes a dystopic view of the effects of technology – note the increasing accidental casualties caused by the various tech, as well as the damage to buildings and trees.

Like technological determinism itself it has a slightly simplistic view of the world, with each old technology being consigned to the scrapheap as soon as the next newer one comes along, in reality despite my shiny new phone I am typing this on my laptop and I have a radio in my car and a TV in my house (and now I come to think of it newspapers in my recycle bin and books on my 6 bookcases).  It is however a bit mean to criticise a cartoon too heavily for being simplistic and the tossing of the old technology onto the scrapheap is a good shorthand for the throwaway society in which we live.

Similarly the films characters had little choice in their adoption of the new technologies, however  in reality Luddites can fight a valiant rear guard action against the adoption of a new technology for years (not that I am complaining – if everybody adopted each new technology as soon as it came out I would no longer have a job!).

If you consider dystopic futures those in which people have lost control of their lives then this is a Frankensteinian version where the creation/technology has gained the control.

Inbox – this was a sweet little film, in my eyes this was a Utopian situation (I can see that some people could argue for dystopia, the look in the mans eyes when the bag rips is a story in itself).  The bags allow the people to connect in a way they never would have done without them (look at the first minute and see how the girl reacts to the 2 men that smile at her).  The technology here is all about the possibilities it opens up.  Interestingly I also think that this film is not technologically deterministic, people were attracted to each other before red bags, this is just another way to find someone.

So Inbox is Utopic with individuals retaining control of their lives

Thursday – Im not sure here, the day to day lives of the humans dont look particularly enjoyable (although I do want to have a go on the space elevator!) they do appear to have lost control (agency) of their lives and the whole planet appears to have been standardised.  What they have lost control to is more problematic, is it to society as a whole and thus probably to the powerful within society (hands up anyone who hasnt replied to a email on their phone from their boss).  By contrast the birds do have control/agency, quite literally flying free.

So Dystopic with control lost to the powerful

New Media; Dystopic, pretty much nightmarish, definitely from the “slaves to the machine” genre.

One similarity that struck me was the slightly organic nature of the machines in both films most clearly identified in the tentacles, this to me indicates the idea of Technological animism with the technology having a force/will/purpose of its own.  Another similarity is the destruction/neglect of the human world (crumbling cities, broken huts) I would assume this is symoblic of the enviromental costs around technological progress.

The biggest difference for me was that the sense of threat or malice was much stronger in the New Media film.  The human deaths in Bendito Machine III, are more accidental side effects of the technology, by contrast in New Media the humans are clearly completely subjugated, I got a strong impression that humanity was on the brink of extinction.

This is another Frankensteinian dystopia

Finally an example of the portrayal of technology in popular medial, I saw this Black Mirror episode some time last year and it really stuck with me – I have already shared it on G+ but it will stand sharing again (its an hour long!).

It is a strongly dystopic view of the future and the effects of the central tech, which is retinal implants which allow you to record and play back everything you see.  I do not like the implications/potential effects that technology could have on the world and it is not really that far into the future, anyone remember Google glasses? And if you were like me when you saw the advert for the first time you probably thought – cool I want some, although this video did dampen my enthusiasm a bit 🙂

Interestingly I would have to classify this as a dystopia where people have lost control to other people, a tyranny of the masses.

How do we know when something using Technology Enhanced Learning (TEL) is actually going to work?  With experience I would say most of us develop a “Gut instinct” about this but I thought I would try to do something a bit more structured.

So I am signed up to the #edcmooc and it starts this monday.  However I have already been very busy on google+ with all my new “fr-aingers” (a word coined by Ary Aranguiz over on “All the worlds a MOOC…  ).  Lots of good links, ideas, conversions, videos etc and the course hasn’t even started yet.

As these things tend to do in eLearning/TEL settings, there has been a fair bit of discussion around the learning processes involved in the MOOC (in a way for some of us this meta course “Whats the use of a MOOC” is a large bit of why we signed up).

So can a MOOC succeed?  More importantly will this one and also how many of us brave new moocers will still be here at the end of the 5 week course?

Well, fortunately, about 5 months back I was looking building something that would work as a quick checklist to see if TEL projects were likely to work. 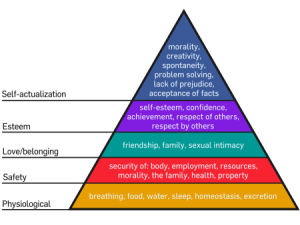 So I spent some time and came up with Gliddon’s Heirachy of TEL.  I hope that this can be used a a rapid checklist for projects/training plans/new systems in TEL. 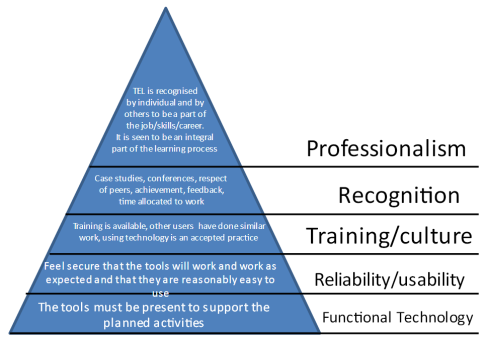 Reliability/Usability – again yes, the technology is supremely unlikely to fail

Training/Culture – this is where it gets interesting, for this MOOC it’s a yes.  For most of the students, using technology is an accepted practice and, for those who haven’t, the community has been happy to support and provide links to training/good practice etc.  Would this be true of all MOOCS – no.  A MOOC on subject where a large number of the students were unfamiliar with technology may run into problems.

Recognition – this level is where I think the MOOCs having online communities really helps.  When I got +1’s, comments and re-posts on items I posted to the community I was surprised by how much validation I felt.  I suspect that as the course progresses a number of the MOOCers will find that they don’t want to drop out because of the recognition they are getting from their peers on the course.

Professionalism – This is the highest level of engagement and will not apply to everyone who is taking the MOOC, but for a lot of us experimenting with new online things is our job.  At my University those of us taking the MOOC have a brief weekly meeting in the diary and taking it is seen as part of our professional development (albeit mainly done in our own time).  The certificate will be nice but I think more valuable will be the recognition of our peers, I certainly think it’s going to expand my professional network a bit.

Ok so I have signed up for the #edcmooc which is probably both a good and a bad thing.