Running to catch up I had some thoughts about last weeks #OcTEL, there was an interesting paper looking at some of the project that had failed and drawing 6 critical success factors for mobile web projects.

Now we were meant to look back at one of our projects and use this to evaluate the key failures and successes of the project.  I didnt do this!

Instead I looked at the 6 factors and thought, I think I can do better than that or at least explain it in a way that is easier to understand.  A year or so back I developed “Gliddon’s Hierarchy of Technology Enhanced Learning”

You can work your way up the levels in this and use it to determine what the potential risks are to your project (just add them to your risk matrix as you consider them).

Looking at the 3 projects identified in the paper

I think the researcher had done some fantastic work in the above projects often struggling on against the odds and achieving some success despite the problems (and lets be honest who hasn’t responded to problems in a project by working harder to solve them).  I hope that for some people using my Hierarchy may give them the opportunity to identify problems early enough to either change them or abandon the project before to much effort is spent. 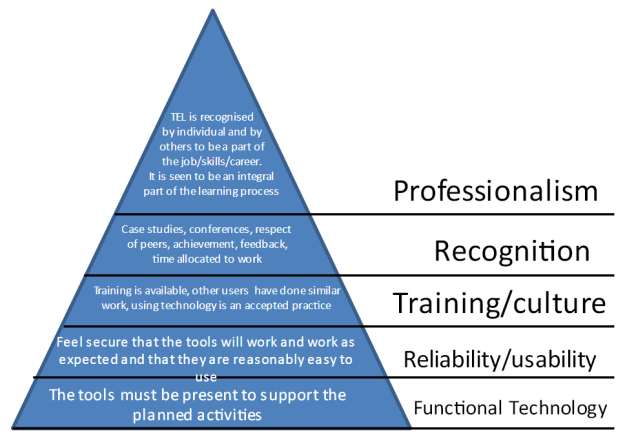